Love the idea or loath it, surfing will be in the Olympic games in Tokyo 2020.  20 men and 20 women, draped in their national flags will march with pride representing their nations as the opening ceremony gets under way in less than five months from now.

The event will take place in the ocean and not in a wave pool as many had initially assumed.  The location, Chiba just a few hours outside of Tokyo will be set up for a eight day waiting period, with the hope that the northern hemisphere typhoon season sends a spinning, swell-producing storm their way.

So how did we get here?  The International Surfing Association (ISA) once known as the amateur world body, is the only surfing body recognised by the International Olympic Committee (IOC).  It’s President, Fernando Aguerre (Co-founder of Reef Brazil with his brother), lobbied tirelessly for decades to have surfing included in the world’s biggest sporting spectacle. In August 2016, surfing secured its place in Tokyo 2020, and then provisionally stayed on the shortlist for Paris 2024. If successful, we will continue on to LA 2028.

Throughout the process, the ISA and the WSL have worked together, receiving approval from the IOC on the qualification criteria.

So how does one qualify for the Olympic games?  Do you have a few hours and a PHD?  It’s been a little difficult to follow, but here’s the official hierarchical order of the qualification process. 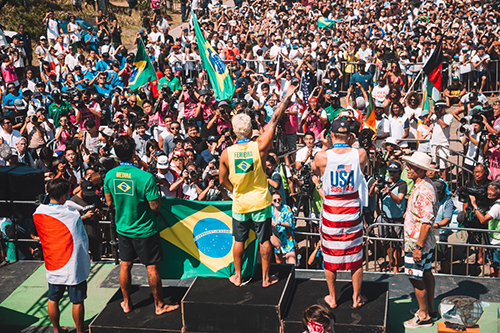 No more than 2 surfers can be represented per nation and there is a swath of surfers already provisionally qualified for this year’s games.

The Lima 2019 Pan American Games determined the first qualification slots in July for Tokyo 2020, with Peru's Lucca Mesinas and Daniella Rosas earning the nods with their Gold Medals in the Men's and Women's Divisions respectively.

With a Japanese man and woman earning qualification regularly, and not through the dedicated host nation slots (Igarashi, Murakami and Matsuda), it will open an additional slot for each gender at the 2020 ISA World Surfing Games. Five men and seven women slots will be contested in May this year.

Dizzy yet? Hang in there, where almost done!

After one of the most exciting WSL World Championship Tour’s in a long time (both men’s and women’s world titles going down to the final event) we now know which of the worlds elite have provisionally qualified for Tokyo.

So why use the word ‘provisional’ so much? Well, all that’s left to do is all the ‘provisional’ qualifiers, including the CT surfers must compete for their nation at the 2020 ISA World Surfing Games as part of the qualifying criteria.  Only after this event, which will be held in El Salvador from May 9 – 17, will the final list of surfers be confirmed.

If the Miyazaki games were any indication of what we can expect in July, we’re in for a real treat. Both as far as the host nations passion and hospitality is concerned, as well as the intensity of the competition.

The partisan Japanese surf fans turned up in their droves and Brazil fired a warning shot with an impassioned team gold medal.

No matter which side you sit, it’ll be difficult to resist having a little peek over the fence into what could be the catalyst for another global renaissance for the sport.  Do with that what you like, but surfing will have a new global audience come July this year, and that might be just what the surf industry needs.

Stay connected for all the good surfing news and fun by following us on social media:Instagram and Facebook.